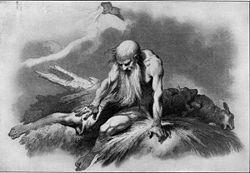 This essay is a look at the function and role of the adversary known as ha-satan in Judaic tradition. The ha-satan is seen as one of the earliest prototypes for the Christian Satan, as these stories of ha-Satan could be where this entity known as Satan may have got its adversarial nature from. These comparisons between the descriptive term ha-satan from Judaism, and the role of the entity known as Satan from Christianity will be shown here. The texts used for this comparison are the Hebrew Torah [which was translated into English], and the King James version of the Bible.

The name or title, ha-satan [ha-saTAN] literally translates from the Hebrew into a word the satan, which in English means the accuser. The name ha-satan in the Judaic tradition does not refer to the same being or entity that is known to Christians, who is an antagonist and enemy towards God. The ha-satan of the Torah is not portrayed as an evil demon, unlike Christianity, where Satan is seen as the devil {Greek, Diabolous] who tempts man away from God while playing an adversarial role.1

The Adversary in the book of Samuel

The word ha-satan is found several times in the Torah. The word, was originally intended to describe an accuser, or one who opposes. The first instance of this word is found in [Numbers 22:22]..“and the angel of the Lord placed himself in the way for an adversary against him. “ The word satan is found here in the original Hebrew text which literally translates as like an adversary. It can be said that this word ha-satan is not a name or a title, it is a noun and in this case it Is used as a descriptive adjective for the enemies, the adversaries of the nation of Israel.

Ha-satan is used as a descriptive word against the armies of the Philistines, in the Torah, found in the book of prophets [I Samuel 29:4]..“and let him not go down with us to battle, lest in the battle he become an adversary to us;”. Once again, this original word ha-satan written in Hebrew, is only a descriptive term meant to describe the opponent in this verse.2

The Adversary in the book of Zechariah

Another text which describes the ha-satan, or opponent to God is found in the verse of [Zechariah 3:1] “1 And he showed me Joshua [yeshuah] the high priest standing before the angel of the LORD, and Satan standing at his right hand to accuse him.” In this verse the Angel of the Lord appears before Joshua and standing beside the Angel, is the accuser. This ha-satan is translated into English as “Satan” and is capitalized to show that it is a name, not a title or a general description.

A comparative look at this text can reveal how the Hebrew word ha-satan from this same verse, became the Christian entity known as Satan in the Old Testament. The verse Zechariah 3:2 states that the God that has chosen Jerusalem has rebuked, or refuted and accused his enemy! [Zechariah 3:2]..” And the LORD said unto Satan: ‘The LORD rebuke thee, O Satan, yea, the LORD that hath chosen Jerusalem rebuke thee;” Again, just as with the other verses that are re-translated to form the Old Testament, this title of ha-satan appears to be a reference to those who oppose the nation of Jerusalem and it’s God.

Unlike other translations of the word ha-satan, in this later Old Testament translation of the verse, the word, accuser is not used in place of ha-satan as it had been with other translations of the same texts. It is replaced with the word that eventually became a title, and then the name of “Satan”. This Satan personified the enemy of God, in the Christian translation of this verse, whereas in the Torah verse it simply refers to the enemies of the God of Jerusalem.

Satan as the Adversary in the Book of Job

In the book of Job, the ha-satan of the Torah becomes a literary figure in Christianity and takes on the role of the accuser. In this story, some literal translations of the text replace Satan correctly as the adversary [Job verse 2:1],..“Again there was a day when the sons of God came to present themselves before the LORD, and Satan came also among them to present himself before the LORD”.

The story is told of how the adversary [Satan] challenges God and his powers by proposing that Job will want to turn against God if he did not have all of his blessings. God agrees to this challenge on one condition; that Satan, the opponent, must spare Job’s life. God then gives this opponent full authority over Job’s life in order to test his faith in god.In a later verse, God Asks Satan where he comes from. The literal translation from the torah reads like this [Job 1:7]..“And Jehovah saith unto the Adversary, ‘Whence comest thou?’ And the Adversary answereth Jehovah and saith, ‘From going to and fro in the land, and from walking up and down on it.'”

The adversary, translated into Satan takes on its character and origins in the christian paradigm as a spiritual entity in this verse where it says that this Satan, or adversary roams the earth. This personification was for the sake of creating a religious parable and this interaction between God, Satan and man became the first appearance of Satan as a spiritual entity that was meant to watch over the affairs of humans.

In the story of job, the adversary took everything away from Job, his family, his livestock and even his crops. If you read through the story it describes how the Sabeans slaughtered his oxen, and the Chaldeans slew Job’s camels and his servants. Its also known that the Sabeans and the Chaldeans are the enemies and opposer of the God of Job. Some want to interpret this story as a parable or a lesson, but from a literary sense it only describes the enemies of God putting job through a test, not Satan and God working together to teach Job a lesson as it is taught by the Christian religion.

The yetzir hatov is the quest towards God and goodness while the yetzir hara is the inner impulses, that becomes the ha-satan or the opposer to God. I think this concept is similar to the Christian paradigm which suggests that virtue leads one towards salvation and God while life of vice or sin leads one away from God, and Satan is the acting force in this process that leads men away from God and a life of goodness. 3

With the inconsistencies of the translations and the story of the book of Job, it is easy to see how the word ha-satan became an agent of evil in christianity. The word ha-satan originally was meant as a general term within Judaism to describe an opposition to God, became a name and a title within Christianity, and personified into a being that opposes and tempts man into sin. This personification of the enemy of God is what separates Judaism and Christianity in a major way. From what I have researched the religion of Judaism never had a need for a literal Satan, as their redemption was dependent upon free will. The Christian religion assumes that humans do not have free will, and the Christian religion is dependent on this [created] force and phenomenon known to them as Satan as an incentive to be good – which leads their followers closer to their God.
© 2016, Venus Satanas

1 Reference to Satan in the Old Testament
http://www.jewishencyclopedia.com/view.jsp?artid=270&letter=S&search=satan accessed 12/6/09
2 BibleGateway with Translated Versions
http://www.biblegateway.com/ accessed 12/6/09
3. The duality of good and evil in Judaism
http://original.britannica.com/eb/topic-653107/yetzer-ha-tov accessed 12/6/09