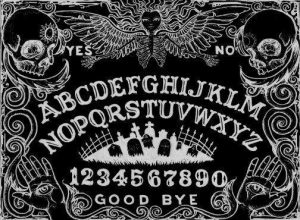 suggested on the internet that a “guardian demon” can be contacted with a Ouija board. In this method the Ouija board user calls out to whatever is there and the name of the ‘demon’ is spelled out in the letters of the board. However, using an Ouija board to summon a demon is not a useful exercise.

This is done with a home made board using a string and a weight (called a pendulum) Usually this method is suggested when a person is very inexperienced in occult matters and it doesn’t take much to make them think that something real is going on.

A Spirit Board is a Game.

1. While the Ouija or talking board had been used for centuries by various cultures, it was modernized in the late 1800’s. The Ouija game was originally a parlor game that was created by Elija Bond. It’s original intent was for amusement, unrelated to spirituality. It wasn’t until World War 2 when Spiritualism became popular that the Ouija game was used to “speak to the dead”.

A spirit or Ouija board as a spiritual device is a tool that was developed for speaking with the lowest forms of spiritual life, that being the spirits of departed humans. It takes very little skill or knowledge to do this. Because of this, its a popular beginners tool for those who want to experiment with the spirit realm.

Demons are not the Same as Human Spirits

2. Demons are not on the same spiritual or energetic level as dead human spirits. This is because a demon is a divine spirit, and conversely, human spirit is trapped in the astral and is most likely to deceive the Ouija user into thinking that it’s a demon – just to gain attention and focus, which feeds it’s energy.

This continues into a cycle where the Ouija board user believes that they are in contact with a demon, and the astral spirit fools the human into returning again and again to feed them their energy through emotion and thought. Demons are not the same spiritual level as humans. Trying to use a device meant for spiritual human contact to connect with something more divine than a human is not very useful. You might as well be using a can with a string to call someone instead of using a telephone.

3. Using an Ouija board requires no spiritual experience whatsoever. It’s as simple as placing your hand on the board, whereby the planchette is directed either through subconscious manipulation or through those lower astral forms that influence the Ouija user. To summon a demon requires skill and experience and to deal with a demon requires a certain strength of will, that most inexperienced Ouija board users can not even begin to imagine.

Summoning a demon requires tools and ritual work. Tools include sigils, candles, a ritual setup and invocations that are specifically suited to each demon. Using an Ouija board to summon a demon does not provide these necessary steps.

The Inexperienced do Not Know How to Deal With the Spiritual Realm.

4. The users of Ouija boards, being inexperienced, are highly susceptible to self-delusion and convincing themselves that they have contacted a demon. Lacking the necessary perceptual skills to actually summon or to deal with demonic influence, they feed into this delusion without question and are highly likely to fail, and be disillusioned in the end. Save your time and learn useful skills that could really help you, instead.

5. Because an Ouija board is made to summon the dead, to use it to try and summon demons means that 1. you don’t know how to use an Ouija board properly and 2. you have no experience in dealing with demons and you are looking for a crutch, and easy way out that will produce immediate results. There is nothing in magic or in summoning that is easy, that produces immediate results, without having the skill and knowledge that it requires to manipulate the forces of magic and spirituality according to your will.

6. The idea that you use an Ouija board to summon a demon, are primarily the beliefs of Christians who think that any spiritual tool is the tool of the devil. Hence, the belief that you can use an Ouija board to summon a demon. There are many, many books and documents written by Christians that expound on this idea. So if the idea of summoning demons from an Ouija board sounds familiar, it is. It came from Christian beliefs. As such, Christians do not know how to summon demons, generally..but they do feel that they have the power to evict them by spiritual means through de-possession, or exorcism.

It takes a lot more skill, focus and will to summon a demon than it does to move a planchette or to wave a pendulum over a board to contact a human spirit. So instead of wasting your time by using a spirit board to contact divine entities, wouldn’t it make more sense to discover how to actually summon a demon? My suggestion is that you shouldn’t waste your time with a board game if you really want to summon a demon. For More information, read my article on the Guardian Demon, Friend, Teacher or Myth?