Ancient Greece brought us many dark cthonic gods, ready to bring order to humankind through acts of vengeance. The three 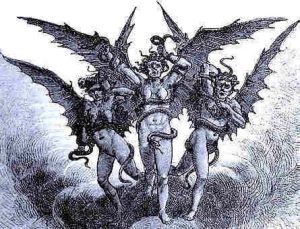 ancient spirits, known as the Erinyes (the Furies) were forces of retribution personified. They punished unforgivable deeds like homicide, patricide, offenses against the gods. The three Furies served as a way for a person to gain retribution by calling on them. They brought misery and suffering to those who could seek justice in no other way.

The three furies, known as Alekto (the endless) Megeaera (jealous rage) Tisiphone (vengeful destruction) were often portrayed as hag-like creatures. The poem below was created by Aeschylus, who was considered to be the father of Greek tragedy. This poem is part of a story called The Eumenides.1

This is a story of justice and retribution showing how the forces of fate can intervene in the process of serving justice. In this story, a man named Orestes killed his mother in an attempt to claim her throne after he had been banished by her. The Furies are summoned by the ghost of Orestes’ mother who seeks revenge against her murder.

Song Of The Furies

Up and lead the dance of Fate!
Lift the song that mortals hate!
Tell what rights are ours on earth,
Over all of human birth.
Swift of foot to avenge are we!
He whose hands are clean and pure,
Naught our wrath to dread hath he;
Calm his cloudless days endure.
But the man that seeks to hide
Like him, his gore-bedewèd hands,
Witnesses to them that died,
The blood avengers at his side,
The Furies’ troop forever stands.

O’er our victim come begin!
Come, the incantation sing,
Frantic all and maddening,
To the heart a brand of fire,
The Furies’ hymn,
That which claims the senses dim,
Tuneless to the gentle lyre,
Withering the soul within.

The pride of all of human birth,
All glorious in the eye of day,
Dishonored slowly melts away,
Trod down and trampled to the earth,
Whene’er our dark-stoled troop advances,
Whene’er our feet lead on the dismal dances.

For light our footsteps are,
And perfect is our might,
Awful remembrances of guilt and crime,
Implacable to mortal prayer,
Far from the gods, unhonored, and heaven’s light,
We hold our voiceless dwellings dread,
All unapproached by living or by dead.

What mortal feels not awe,
Nor trembles at our name,
Hearing our fate-appointed power sublime,
Fixed by the eternal law.
For old our office, and our fame,
Might never yet of its due honors fail,
Though ‘neath the earth our realm in unsunned regions pale.