Origin of the Guardian Demon 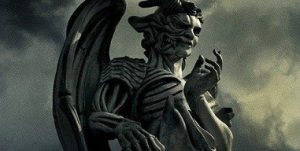 For these ancient people the act of speaking with the divine, known as the daimones, was a part of every day life. “A special knowledge of daimones was claimed by the sect of Pythagoreans; they could not only hear the damiones but even see them, and expressed great surprise that this was not accepted as quite natural by other men.” 2

For some the daimones was a religious concept, a force that represented the action and works of the gods. it also represented gnosis and wisdom, and guidance. They remained invisible to most, but to those who understood the ways of the daimon, they could be known by their actions. This can also be compared to the stories of Socrates and his inner oracle, or daimon that served as a source of inspiration.

Daimon Were the Forces of Fate

According to Hesiod and his works on mythology, when the men of the golden age faded away, their forms were transformed ‘by the will of Zeus’ into the form of daimones, who were to be guardians over the race of mortal men, and act as good beings who would dispense riches. The daimon were the forces of fate, whether they were for good or for evil, and it represented the action and power of the gods in the realm of mortal men; but they were not the gods themselves, only the result of their movements. The works of the gods were veiled through the force of the daimon.

This daimon served as a guardian by working as the guiding hand of the gods. It also served as an enemy, or force of resistance. It is not too difficult to see that the forces that represented the actions of the gods, were eventually ‘demonized’ by the church, and were proclaimed to be evil, and a source of trickery and deceit. Of course, under the rule of the ‘one god’ of monotheism, the forces of the former gods were abandoned as ‘pagan’, eventually and the rest is history.

The Greek Daimon and the Roman ‘Genius’

I wanted to see if the word daimon and the word genius were related. It would seem that the Greek ‘daimon’ would be synonymous with the word, genius, if it represented some kind of inner knowledge or gnosis. The Greek daimon were similar to the Roman Lares, which were spirits that served to guide and protect, and (in Roman mythology) they served in specific areas of life, such as fields, or houses.

The word genius is latin. it is related to ingenium, ‘the genius of the mind’. This refers to the self, and one’s own intelligence and knowledge, and not to the spirits, daimones, or lares that the Greeks and Romans knew.

However, later on in history the word ‘genius’ is also described as a guardian spirit:”1390, from L. genius “guardian deity or spirit which watches over each person from birth; spirit, incarnation, wit, talent,” from root of gignere “beget, produce” (see kin), from PIE base *gen- “produce.” Meaning “person of natural intelligence or talent” first recorded 1649.”

The key point here is that to understand why we use the terms we use today in magic and Satanism, it’s important to know the history of these ideas. The daimon is not the ‘inner genius’; it was the force of the gods in physical manifestation. The genius, according to mythology is the guardian spirit that influences the actions and intelligence of the self. From the root of the word, ‘beget or produce’ we can see how the genius spirit produces knowledge, or knowing [gnosis, or genius]. It is, what it creates. From the other usage of the word, a ‘person of talent’ we can see how ‘genius’ is described as something that is experienced by the naturally adept.

So why do Satanists believe that they have to have a guardian demon?

Why do people believe that they have to have a ‘guardian demon’? Is it that they want some type of magical interaction, but that they also want a barrier of protection and guidance to cushion them when they fall? Do people really lack that much will and determination to learn on their own, that they are ready to replace self assertion with delusion? Is a Demon really going to guard you and protect you as if you were one of it’s own children to nurture?

The idea of having a ‘Guardian Demon’ is obviously taken from the works of Aleister Crowley and the methods of Ceremonial Magic, whereby the magician seeks to find one’s own “Holy Guardian Angel”3. In simple terms, it is akin to finding one’s own guiding spirit. In Satanism this is reversed and conveniently labeled as a Demon. This method is unworkable because the point of being one with your own

Holy Guardian Angel is to seek your own divine will. In Satanism, the participant seeks a demon for guidance, an outside infuence, external from one’s own personal divine will, whereby their own personal will is discarded for the belief that a demon will show them what to do.

Demons, gods, spirits and the like can be experienced as an external phenomenon, and they can also be experienced internally. But, to really seek the kind of guidance that will last you a lifetime, it takes a certain amount of dedication, and searching before the opportunity arises and you have your chance to ‘align’ yourself with a force such as this. if a demon is to be a guardian it should be worshiped as a caregiver, it becomes a relationship, thus lending the self to a position of subservience – just to experience some type of personal enlightenment.

I do not think that demons are evil. In my experience, I have found that a demon is a collection of spiritual energy that serves a singular purpose. Demons neither care for our human flesh, nor are they servants of our will. A demon’s singular purpose is to manifest it’s energy into the physical. It is through this that they are able to exist. It is a symbiotic relationship. And your relationship with a demon is similar. It is not something to be taken lightly nor is it something to dabble with just to see if it works.

The potential dangers of dealing with demons are often self induced by the ill-equipped mage who thinks that the powers of a demon can be harnessed and controlled. If you are emotionally immature, easily upset, depressed, frequently angry or if anything in your life is out of balance, its best that you leave the spiritual dark side alone, for your own sake. Demons care not for our well being, and their influences in your life can spiral out of control.

A demon’s forces are wild, and unconstrained and to try and force a relationship with a demon would be futile. Demons respond best to ritualism and meditation, offerings, and bonding of the spirit through understanding. If this is too much effort for you then you are better off leaving the realm of the demon alone.

I did not approach demon summoning until I had an understanding of the forces of the elements in ritual magic, and I had some experience with magic and spell casting, in general. Because I had this experience, I had no need to approach demons to try and get them to do things for me. If there was something that I wanted to influence, I did it myself through magical influence. But, what I did want from demons was an understanding of their realm, and I wanted to gain a personal relationship with only a few of them, as allies. In the spirit and nature of Satanism, I am very independent and I did not seek their association for guardianship. I am my own guardian.

Many Satanists also believe that they can summon a demon using a simple Ouija board. Find out why this may not be the best course of action.

[2] Greek Religion: Archaic and Classical, Walter Burkert, “the damon does not designate a specific class of divine beings but a peculiar mode of activity” p.181 Accessed 12/14/16