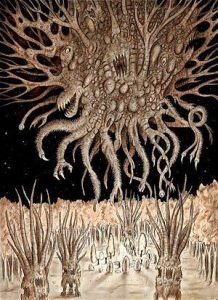 Shub-Niggurath is a creature from the strange tales of the fantasy writer H.P. Lovecraft. In the pantheon of Lovecraft, Shub-Niggurath is an ancient fertility Mother Goddess who comes in the form of a massive dark cloud writhing with black tentacles, moving upon goat’s legs. Shub-Niggurath spews forth creatures from the mouth of hell that are re-devoured into its void, while some of her children escape from her mouth to be free.

According to the legends of Lovecraft, Shub-Niggurath was worshiped by many, and she was evoked in the forest at night, on a dark moon. As the consort of Yog-Sothoth, she gave birth to two monsters, Nug and Yeb. Shub-Niggurath is called the Goat of A Thousand Young, and the God-Mother and she represents the creative force of destruction.

In some tales written by Lovecraft, Shub-Niggurath is portrayed as a male figure, and Lovecraft gives him the title of The Black Ram of the Forest with a Thousand Ewes. Some say that Shub-Niggurath is both male and female and encompasses the entire process of creation, much like the androgynous nature of the goat-god Baphomet1.

Other writers personified Shub-Niggurath as male. In the Book, The Necronomicon written by Simon, he equates the name Shub-Niggurath with ‘Shub Ishnigarrab ‘, and describes him as a Sumerian Male deity. According to Simon, The prefix Shub is found within the Sumerian mythos as a rite of Exorcism, and translated it means The throwing a casting out of what is not needed2. However, the Simon Necronomicon is not a reliable source of etymology, so we are left to interpret this meaning how we wish.

In the book, The Satanic Rituals, Anton LaVey also personified Shub-Niggurath as male, representing Satan as the Goat of the witches Sabbath. He uses this theme as a psychological focus for ritual magic, in a ceremony called the Ritual of the Nine Angles. This is a rite to invoke Shub-Niggurath and release the power and energy of Satan upon the world. In the Satanic Bible is found the invocation to the Witch’s God:

“Hail Shub-Niggurat, Father of The World of Horrors, Hail Father of the Hornless ones. Hail ram of the Sun and deathless one, who sleepest not we honor thy name and thy bond”3

The goat of a thousand young is the high priest of the ceremony and he appears after the invocation to his name. The participants in the ritual then celebrate while Shub-Niggurath completes the invocations of the Nine Angles. According to LaVey, this creature is symbolic of many things in magic and nature, describing him in this way:

“[Shub-Niggurath].. the guardian of the mysteries of magick, the master of dimensions, the herald of the barrier, and the goat of a thousand young.” 4

He personified Shub-Niggurath as the goat god in the form of Satan who would reveal the knowledge of magic and creation to the members of the rite5. Even though this creature is fictional it is a strong representation for the energies of the Left Hand Path.

The legends of Shub-Niggurath seem to encompass the chaotic energies of life and death. The form of Shub-Niggurath Is both human and animal, much like the Baphomet who is the androgynous goat-god of Satanists. However, I would relate Shub-Niggurath as a feminine and chaotic force which manifests energy through destruction, while Baphomet is a Masculine force, and the creature who manifests energy through order and creation. At the same time, both may represent the symbolic and sometimes androgynous aspects of creation, destruction and the mysteries of life, death and magick. 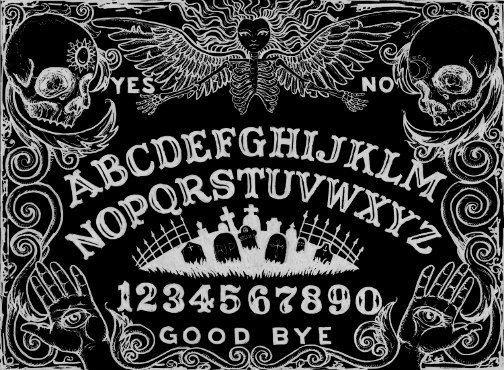